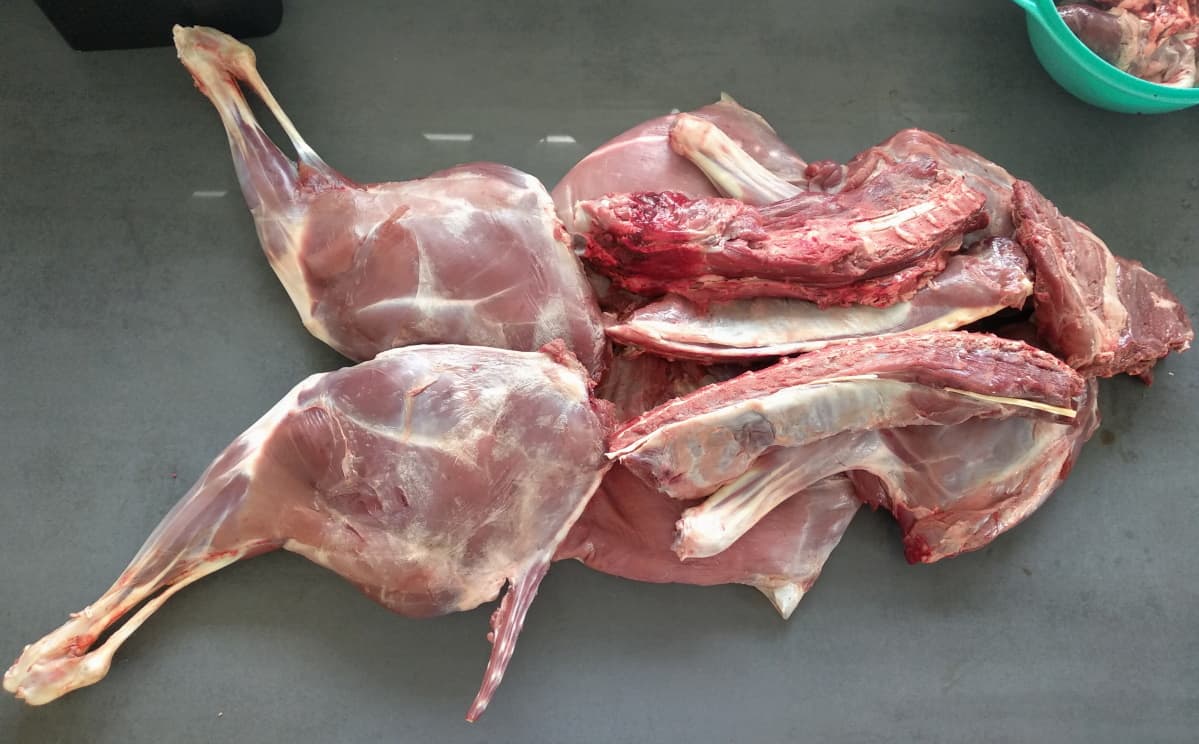 Game meat, for the most part, is best prepared at an internal temperature of medium rare (135 F). However, there are a few exceptions. This type of meat is generally leaner, and overcooking may cause it to dry out extensively or become rubbery and gamey.

Can you eat venison medium rare

Yes, you can eat venison medium-rare. Venison is naturally dark, darker than beef. Therefore, you cannot judge the cooking condition by the internal color after cooking. It is best to use a thermometer.

Venison is very lean and contains very little fat. This meat also contains less cholesterol and more vitamins B6, B12, and omega fatty acids. One of the biggest mistakes that is often made with venison is overcooking it. This makes the meat very dry and gamey.

Tender parts of Venison, such as loins and tenderloins, are best prepared over high heat, such as grilling or searing. Other, tougher parts such as shoulder, neck, or shank are best prepared by slow and gradual cooking such as braising or stewing.

Be advised, though, that the Center for Disease Control and Prevention (CDC) advises, for safety concerns, to cook wild game to an internal temperature of 160 F.

The answer to this question is no. You cannot eat medium-rare wild boar meat.Much like pork, wild boar should be cooked all the way through.

Wild boar has a rich, nutty flavor and is superior to pork in taste and texture. In fact, it is a cross between beef and pork. Wild boar is lower in fat than pork but also contains more moisture than pork. This meat, while lean, contains marbling and is best watched during the cooking process.

Different cuts of meat require different cooking methods. Steak and medallions can be wrapped in bacon and pan-seared or thrown on the grill, while shoulder can be slow-roasted at a low temperature.

Can you eat bison medium rare

Yes, bison meat can be eaten medium-rare. Most chefs recommend this as the best cooking temperature for bison.

Bison has a darker red meat than beef. It is leaner and contains less fat and cholesterol but more vitamins, minerals, and protein. Because it is lean, it cooks much faster than beef. Bison does not taste like venison or gamey meat but has a rich, almost sweet flavor. However, ground bison should be cooked to an internal temperature of 160 F.

Specific cuts of bison, such as roasts, benefit from slow, low cooking methods. Depending on the size of the steak, bison should be grilled or seared over medium heat.

Can you eat elk medium rare

The answer to this question is yes, you can eat elk medium-rare. Many a chef will recommend grilling elk steaks to an internal temperature of no more than medium-rare.

Elk, just like the other game meats on this list, is a very lean meat. It also has dark red meat and a similar flavor to beef, a tender texture, and a sweet taste.

Elk steaks are best prepared by searing them briefly over high heat. This locks in the moisture.

The answer to this question is yes, you can eat alligator meat medium-rare. It is best cooked to an internal temperature of 140 F or, alternatively, “just cooked.”

The color of alligator meat is white. It has a slightly grainy texture, is firm, and has a tender texture. It is often considered a healthy alternative to pork, chicken, or fish and is prepared similarly to chicken and fish.

Most chefs recommend marinating the meat for up to six hours to make it more tender. This meat tastes best in the form of chops and is best grilled, broiled, and fried.

The answer to this question is yes, you can eat camel meat medium-rare.

Camel meat is lean and is easily overcooked. The hump of a camel is considered the fattest and most tender piece of meat. It contains a lot of marbling. It has a similar flavor to beef, but certain cuts can be tougher. Older camels tend to have a gamey taste.

It is best to bring the camel meat to room temperature before cooking. Oil the meat, not the pan. It can be seared, grilled, braised, or slow-cooked. The meat can also be shredded for burgers or tacos.

Dove, like duck and squab, is considered red meat. So the answer to this question is: Yes, you can eat dove medium-rare.

Dove meat is very lean and has a distinct rich flavor and somewhat silky texture. It is moist and easy to digest. It has a milder flavor than a duck. Some say it tastes like venison.

The best cooking method for dove is grilling. This produces crispy skin without overcooking the core of the meat.

Can you eat goose medium rare

Yes, both a goose and a duck are among the birds with red meat. It tastes best when served medium-rare.

Goose has a rich flavor and dense meat. Its high fat content is under the skin and not in the meat itself. This is wonderful because when cooked, the fat melts and serves as a base for the meat. Because of its intense flavor, it is more often compared to beef than chicken.

Can you eat emu medium rare

The answer to this question is yes, you can eat emu steaks grilled medium-rare. Many chefs will recommend this.

Although emu is one of the poultry species, its meat tastes similar to beef. The meat is very low in fat. It can even be cooked very well in a wok.

To get the best flavor out of emu strips, it is best grilled or pan-fried until medium-rare. When grilling, cook the meat quickly and over high heat. Of course, different parts of the bird may require different cooking methods.

Can you eat moose medium rare

Yes, moose meat can be eaten medium-rare. If you cook the meat longer than medium rare, it tastes like shoe leather.

The flavor and texture of this meat is similar to a harder, meatier, leaner cut of bison, beef, or venison. Moose meat carries the flavor of the diet in the area where the moose lived. It can resemble a floral flavor combined with willow buds.

Depending on the part of the moose, it can be seared, pan-fried, roasted over medium heat for a longer time, or braised.

Can you eat pheasant medium rare

Yes, you can serve pheasant pink.

Pheasant, especially wild pheasant, has a smoky flavor that is strong and aromatic. Some say it tastes similar to chicken, others say it tastes more like venison. The meat of the pheasant is very lean and can be quickly overcooked, making it taste very dry.

The best method of cooking pheasant is to roast it in the oven with plenty of fat added. This will give you the tastiest results.

Can you eat ostrich medium rare

Yes, you can serve and eat ostrich meat medium rare. Professional chefs mention that this meat is best served raw to half raw.

Ostrich is a very lean meat and resembles beef more than chicken, although it is redder than beef. Ostrich has a similar flavor to grass-fed beef. However, it is similar to venison in terms of low fat content. The great thing about ostrich meat is that it takes on the flavor of any marinade. It’s not quite as flavorful as elk or as strong as bison.

Game poultry should be cooked to an internal temperature of at least 160 F, but preferably closer to 170 F. These are the minimum safe cooking temperatures for this type of meat.

So, you might think it's okay to eat black mussels all year round! There is an old saying that mussels should only be eaten in the months that have an R in the spelling, and that includes September...