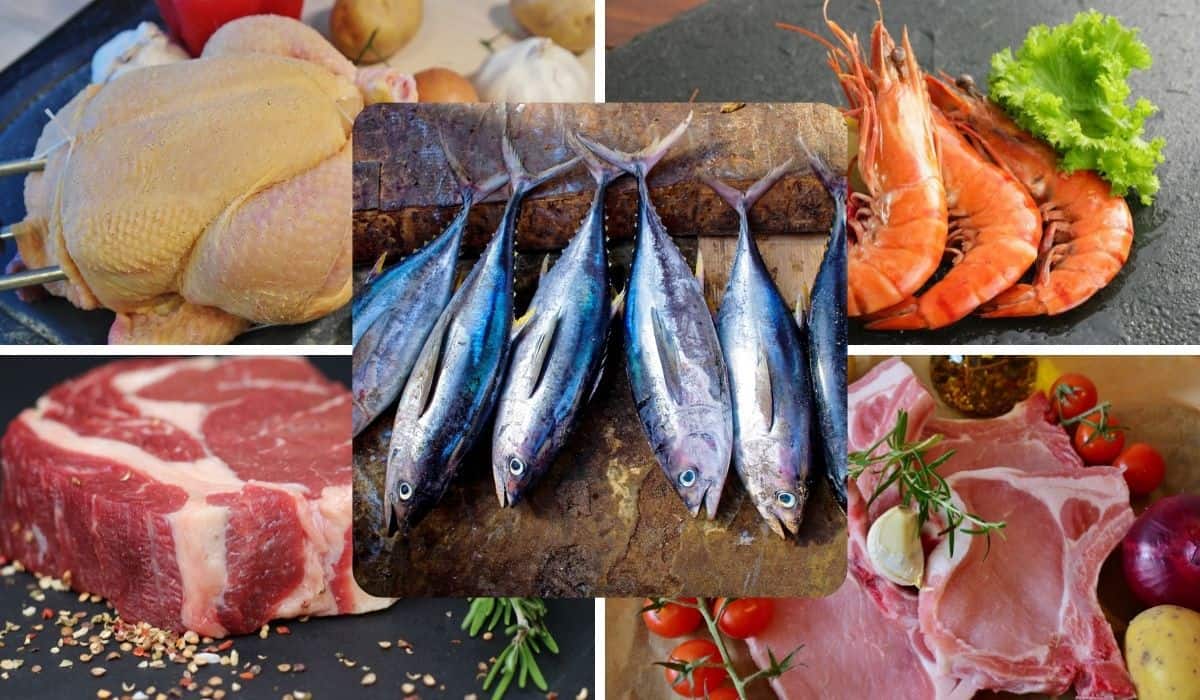 Paella, fish stew, and other dishes that combine meat and fish are easily found. Different cooking temperatures, cooking times, and the worry of cross-contamination raise the question of can you cook meat and fish together?

Unless you have specific religious limitations, cooking most meat and fish together is perfectly fine. There are a few things to consider regarding safety and cooking times, but you can cook them together as long as you follow basic precautions.

Can you cook fish and meat at the same time?

Unless you are a strict (Orthodox) adherent to Judaism, cooking fish and meat at the same time should not be a problem. For Jewish cooks, the Talmud specifically teaches that cooking or eating fish together with meat can cause a skin affliction similar to leprosy, as well as bad breath, and should thus be avoided.

Whether this is true or not is debatable, but if one abides strictly by the Talmud, one should avoid this practice. General precautions to follow when cooking meat and fish together include:

Can you cook fish and chicken together?

You can safely cook fish and chicken together. However, it’s important to follow some safety precautions to ensure there is no cross-contamination.

Chicken is prone to be contaminated with Campylobacter, and occasionally with Salmonella or Clostridium perfringens.

To minimize such risks, estimate how long the chicken and fish will each need to cook. Put the fish into the pan in the final minutes of cooking so that the chicken is already mostly cooked before the fish is added.

While the chicken is in the pan, do not pierce it with a fork, knife, or another cooking utensil. If you must pierce it to check it for doneness, remove it from the pan first so that any juices don’t escape into the pan and contaminate the fish.

If it is undercooked, don’t return it to the pan for additional cooking until the fish is removed.

If you are cooking the fish and chicken in deep liquid, such as in a soup, stew, or chowder, you don’t need to worry about cross-contamination, as the hot liquid will prevent this.

Can you cook pork and fish together?

While you can cook or eat pork and fish together, pork may be contaminated with the Trichinella spiralis parasite. It is killed when the pork is fully cooked, but any juices that escape the pork before it is thoroughly cooked may contaminate anything else in the pan.

For this reason, if you must cook pork and fish together, be sure the pork is almost done before adding the fish to the pan. Also, do not pierce the pork after the fish has been added.

As with chicken, if you must pierce the pork to check for doneness, remove it from the pan first, and if it is undercooked, do not put it back in the pan to finish cooking until the fish has been removed.

Can you cook fish and beef together?

Beef is not usually prone to food-borne illnesses other than E. coli. E. coli is not found in the flesh of the cow, but rather in its fecal matter and digestive tract. For this reason, most beef is not contaminated, because proper precautions are taken to avoid the meat being contaminated with fecal matter.

The biggest chance for contamination is in ground meat, or on the outside surface of cuts like steaks or roasts. This means cooking beef fully on the outside should kill any potential contaminants, thus rendering it safe for cooking with fish.

Ground beef should be cooked separately from fish to avoid possible cross-contamination.

Remember that beef will likely take considerably longer to cook than fish, so you’ll either need to remove the fish when it’s done cooking or put it in the pan with the beef when the beef is almost done.

Can you cook fish and shrimp together?

Cooking fish and shrimp together is safe; however, the two do often have significantly different cooking times. For this reason, you should either remove the shrimp from the pan as soon as it’s done.

When the orange color appears on the shrimp, and the translucent flesh turns an opaque white, continue cooking the fish or put the shrimp in during the last 3-5 minutes of cooking time for the fish.

Is it dangerous to eat meat and fish together?

It is not dangerous to eat meat and fish together. It is recommended in the Talmud that you should not eat meat and fish in the same course, and if you eat them at the same meal, you should eat another food between the fish and meat course as well as drinking something, and you should also wash your hands between courses.

If you don’t practice Judaism, this is not a concern, and you can eat them together freely.

As long as you take proper precautions to prevent cross-contamination, cooking meat and fish together is perfectly safe. You can reduce the risk of cross-contamination by ensuring the juices don’t escape the undercooked meat and making sure the meat is mainly cooked before adding the fish to the pan. You can also mix meat and fish safely in dishes with a liquid base, such as a soup, stew, or chowder.

So, you might think it's okay to eat black mussels all year round! There is an old saying that mussels should only be eaten in the months that have an R in the spelling, and that includes September...